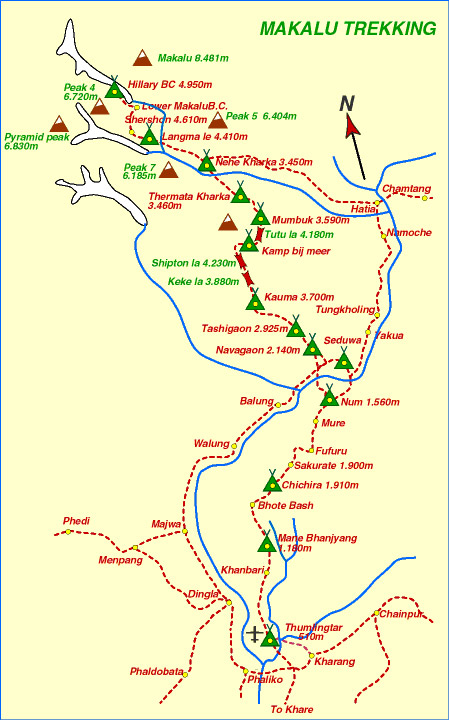 Makalu (8,463) is the fifth highest mountain in the world. It is an isolated peak, located just 14 miles east of Mount Everest. Its size alone is impressive, but its structure, that of a perfect pyramid with four sharp ridges, make this mountain all the more spectacular.

It has proved to be a challenging climb, as only five of its first sixteen attempts were successful. Previously, it had been admired and studied by several Everest parties, but like so many other giants in Khumbu region, it was not attempted to the summit of Everest had been attained in 1954. A French group first climbed Makalu in the year 1955.

Even people who know very little about Nepal can tell you that Mt. Everest is the highest ...

Mt. Dhaulagiri may not be as well known as Mt. Everest, but this is the seventh highest ...

One of the most majestic peaks in all of Nepal is Mt. Manaslu. This sacred mountain, located ...

A stunning peak lies in the western part of Nepal. This mountain had surmounted by Maurice ...

Lying in the Everest region, Pumori is one of the popular destinations for the fan of ...

Ama-Dablam is renowned for its incredible beauty. Located to the south of Everest and ...

Baruntse is located between Everest and Makalu in the eastern part of Nepal. Baruntse ...

Mt. Tilicho having a height of around 7000m. It is a little bit harder to climb than the ...

Mt. Ratna Chuli 7035m. located between the border of Nepal and Tibet in the north of the ...